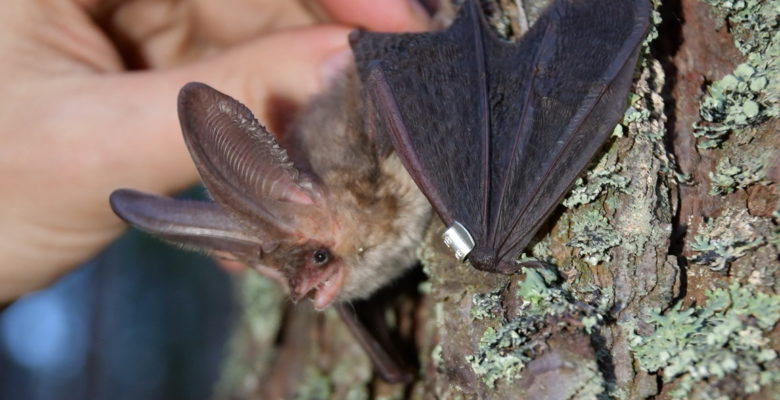 The Chornobyl Center’s specialists and representatives of the Chiropterans Rehabilitation Center ‘Feldman Ecopark’ (Vlashchenko A. S., Golovchenko O. M., Kovalyov V. V., Parfilov O. O., Tymofyeyeva O. V., Tovstukha I. A.) carried out the investigation works on the chiropterans fauna of the left-bank part of the Exclusion Zone in July, 2018. Chiropterans (bats) are a vulnerable group of animals and are fully included in the Red Data Book of Ukraine (2009). Knowledge on their species diversity, abundance, territorial distribution and status will help in the development of the environmental issue of the recently established Chornobyl Radiation and Ecological Biosphere Reserve. The attention to the left bank is dictated by the lack of data compared with other parts of the Exclusion Zone. During the field expeditions, the bats were caught with the special chiropterological net, described, ringed and released at the trapping areas. Additionally, with the audio recorders operating in the ultrasound range (song-meters), a daily recording of vocalizations for the further identification of species composition was conducted and estimation of species abundance and description of daily and seasonal changes in the behavior of bats were provided. Among the caught nine species, a special attention should be paid to the fact of the regular registration of the European free-tailed bat, a rare bat with a high safety category (according to the European Red List). In addition, the audio recorders have repeatedly recorded the appearance of a giant noctule, the largest and also a very rare bat of Europe. Thus, according to the results of research, a left bank of the Chernobyl Exclusion Zone is characterized by a large number of natural boundaries where many bats live and breed, including those with the high conservation status in Europe.