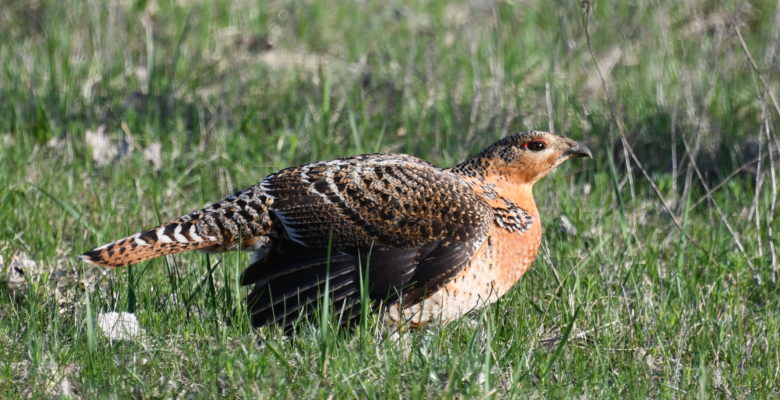 Another rare species of the fauna of Ukraine that lives in the Chernobyl Exclusion Zone – capercaillie was found and photographed on April 20, 2018 by the Chernobyl Center scientist, Sergey Gashchak, during the scientific and research works.

The female of this species was met directly on the roadside of the main road Chernobyl-ChNPP near the village Copachi. Long time ago, the capercaillie was a common wood bird of Polesye, which almost disappeared due to the persecution and destruction of forests. In recent decades, it was registered in Zhytomyr region, and sometimes in other places – in Rivne and Volyn regions and in the Carpathians. In the north of Kiev region the capercaillie was known only in the 60s of the XX century. Rumors about its presence in the Exclusion Zone had been going on for many years, but there was no confirmation of this finding.

So, this is the first proof of the bird presence in the region. At the same time, the discovery of the capercaillie in the very center, near the industrial zone, indicates the growth of its number and expansion of the habitat, and also indicates the favorable conditions of the region for the species conservation.