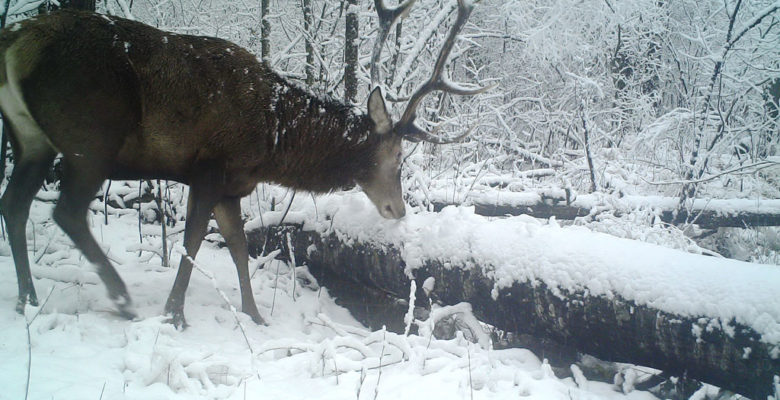 In connection with the creation of the Chernobyl Radiation and Ecological Biosphere Reserve, one of the current urgent tasks was the determination of the criteria for the functional zoning of its territory. Apart from others, these is the value of the individual lands in the lives of the animal rare species. The more Red Book animals are there, the higher diversity of them is, and such sites have the greater value.

The survey of the sites for this purpose took place in the past, but due to the large size of the Exclusion Zone, only 20% of the total area has been investigated as for now. In 2018, the work was continued and the main efforts were concentrated on the left bank part of the Pripyat River. In January-March of this year, the experts of the Chornobyl Center for Nuclear Safety, Radioactive Waste and Radioecology conducted foot survey of the several sites of the left bank, recorded tracks of animals (lynx, otter, elk), described the local conditions, using the presence of snow cover and ice in the water reservoirs. In addition, the trail cameras were arranged on the site; they will help in collecting actual material and in the spring-summer period.

Researches are conducted in the frame of UNEP-GEF project “Conservation, Optimization and Management of Carbon and Biodiversity in the Chernobyl Exclusion Zone“.