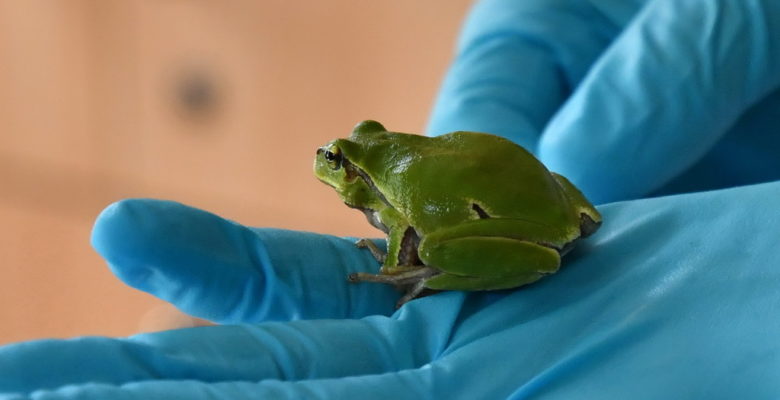 In May 2018, the regular expeditionary work was carried out to study the radiation impact on amphibians with the participation of the scientists from Uppsala University, Sweden, and the Institute for Nuclear Safety and Radiation Protection, France. The work was carried out within the framework of the scientific cooperation agreement with the Chornobyl Center for Nuclear Safety, Radioactive Waste and Radioecology. The main research goal was to identify the mechanisms, by which the animals’ genetic systems overcome the negative radiation impact. As a model species, the widespread in the region species, the tree frog, was chosen. This species is very close to the Japanese tree frog, and therefore the results of this study are of interest for comparison with the results of a similar study in Fukushima accident zone (Japan). During the field work, the researchers were engaged in the search and catching of frogs in the reservoirs of the Exclusion Zone with the different radiation contamination levels. Specifically, this is a night work, because the tree frogs are mostly active at night, ‘sing’ loudly on the spawning ponds. The animals delivered to the field laboratory were described, samples of mucus were taken for the immunological studies, the skin color was photographed for variability evaluation, the behavior was assessed, the radionuclide content was determined, the blood was taken for hematologic analysis and tissue samples were taken for genetic analysis. The selected samples were preserved and frozen in the liquid nitrogen. The further genetic studies will be conducted at the universities of France and Spain.